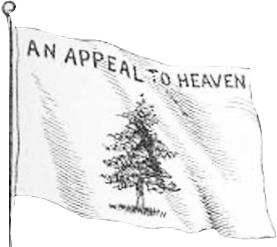 This flag, flown by order of George Washington commander in chief of the Continental Army in October 1775 is a symbol of solidarity, conviction and encouragement to fight for liberty.

"For we aim at what is honorable not only in the Lord’s sight but also in the sight of man."
2 Corinthians 8:21

Through the years, Thomas Jefferson's infamous separation of church and state statement has been perverted, exaggerated and repeatedly used to drive men and women of faith out of public service. Appeal to Heaven (ATH) agrees with the former President that the church and the state must be separate. We deny, however, the interpretation that those who have committed to Christ should not participate in the political process. Many of the men who signed the Declaration of Independence had some Bible School or Seminary training and our founding documents and buildings give credence to Almighty God. These references certainly do not imply a disregard for the teachings of Scripture or those who preach, teach and believe those principles.

ATH began because we saw far too few men and women entering politics who took their Christian faith seriously. We heard the usual excuses. "Politicians are dirty." "The Lord isn't welcome in government anymore." "My family and job take up my time so I don't have time to get involved in something where I really can't make a difference."

With that reality in mind, we are gathering a network of fellow believers serving Christ in public office to fellowship, encourage, and serve one another in our common mission.

There was a time when eastern white pines lined the landscape of the American colonies. With heights more than 250 feet, these trees met England's military and commercial needs for sailing ship masts. For their own purposes, the colonists claimed the supply of trees close to the ocean. The 'Broad Arrow' act, however, allowed the King's men to take an unlimited number of trees inland. This act caused such resentment against the crown that it helped to start the Revolutionary War. The white pine was placed on Revolutionary War flags to remind the colonies of the overreach of the government.

John Locke used the Appeal to Heaven phrase in his work, Two Treatises of Government.: "What is my Remedy against a Robber, that so broke into my House? Appeal to the Law for Justice. But perhaps Justice is denied, or I am crippled and cannot stir, robbed and have not the means to do it. If God has taken away all means of seeking remedy, there is nothing left but patience. But my Son, when able, may seek the Relief of the Law, which I am denied: He or his Son may renew his Appeal, till he recover his Right. But the Conquered, or their Children, have no Court, no Arbitrator on Earth to appeal to. Then they may appeal, as Jephtha did, to Heaven, and repeat their Appeal, till they have recovered the native Right of their Ancestors, which was to have such a Legislative over them, as the Majority should approve, and freely acquiesce in." 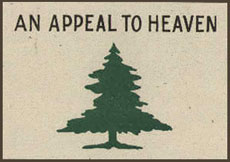 This inspirational phrase used by John Locke was emblazoned on George Washington’s Revolutionary War flag to remind those over whom it flew that after all other alternatives of seeking justice have been exhausted, only an "appeal to heaven" remains. Colonists who saw it were reminded to be wholly reliant upon heaven and the God Who reigns supreme. Their focus was Jesus Christ, and their concern was living by conviction without fear of a worldly cost.

Considering the warfare of our generation, it defies logic for a soldier to enter battle carrying a flag rather than a sword or a gun. When the man carrying the flag was wounded or killed in battle, another man dropped his weapon to pick up the flag. The flying of the flag established the identity not only of the soldiers, but of those they fought to defend. Leaving their identity on the ground was never an option.

Some flags are flown and emblems are worn to show what a person is — status symbols. The Appeal to Heaven flag is flown or worn to show who a person is — a man or woman who does not look to men or government for approval, but lives by the principle of their convictions and appeals to the Almighty for protection, provision, and justice.

ATH exists to honor the Lord by networking elected officials who are believers in Jesus Christ, who regularly attend and display a commitment to an evangelical, Gospel-centered church and who will commit to live and govern based on biblical, constitutional and Federalist principles.

"The people have no other remedy in this, as in all other cases where they have no judge on earth, but to appeal to heaven …"
— John Locke

ATH members share the following convictions: Individuals have the right to worship God freely without the threat of government intrusion. Marriage was created by God as the union of one man and one woman for life as the basic building block of society. Life begins at conception and should be protected until .

Taxes should be levied only to support essential functions of government that individuals cannot do for themselves. The traditional, regressive income and property taxes should be replaced with a fair, sales based tax model.

“The powers not delegated to the United States by the Constitution, nor prohibited by it to the States, are reserved to the States respectively, or to the people.” The Tenth Amendment to the United States Constitution was intended to restrict the overreach of the Federal Government. State governments must restore their proper role and function as “laboratories of democracy.”